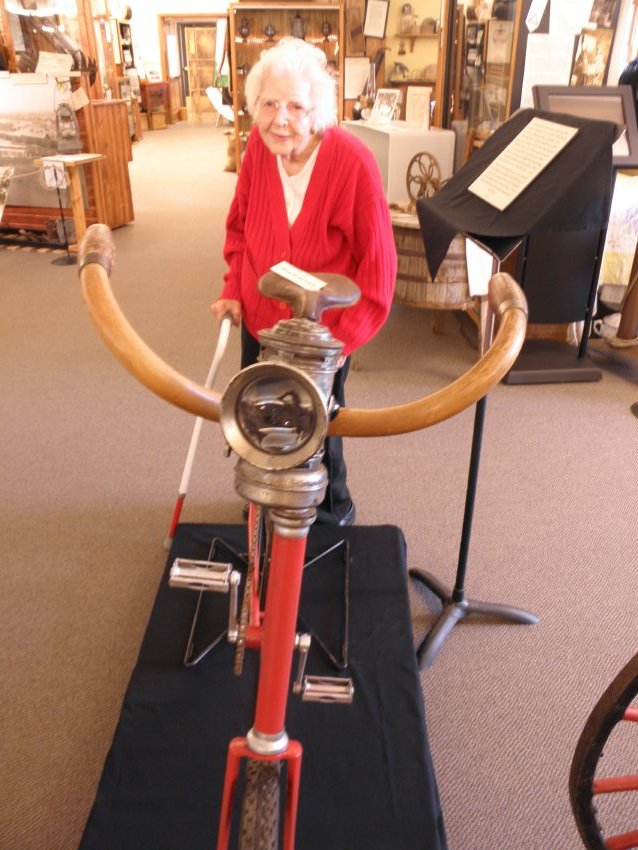 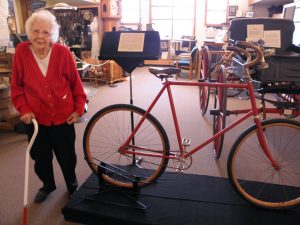 Alice with her mother’s bicycle

In our museum we are fortunate to have a bicycle donated to us by Alice Gooby Petranek. It belonged to Alice’s mother, Della Rodd Gooby.

This bicycle has curved wooden handlebars and wooden tire rims, which date it to the 1890s. It is similar in looks to the Thomas Board Track Racer, but unfortunately has no trademarks or identifying words on it. 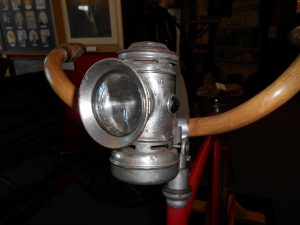 The leather seat is of a racing design, and the bicycle boasts a carbide lamp mounted to the handlebars. Carbide lamps are simple lamps that burn acetylene gas, which is created by the reaction of calcium carbide with water. The reflector behind the flame produces a bright, broad light. Their use began in 1900 and continued for decades.

It wasn’t until the late 1800s that mass production of bicycles made them available to the general population. They were a simple and efficient way to travel beyond walking distance, and more convenient than by horse. It was also probably the first time that women could have their own personal transport and roam about independently. It has been said that the bicycle had more effect on the liberation of women than anything else.

Alice Gooby Petranek was the sixth of seven children. She taught school for more than 47 years before retiring in 1979.  Alice, her husband Ed, and son Rod moved to Belle Fourche in 1950, just 6 months after Rod was born. Alice was an active member of the community and a supporter of the Tri-State Museum. The pictures were taken in 2014. Alice lived to be 105 years old. It was not clear whether she ever got to ride the bicycle.