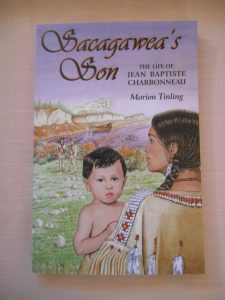 Do you remember Sacagawea from the Lewis and Clark expedition? She is the brave, very young woman who guided the Corps of Discovery through the wilderness of North America. In portraits of Sacagawea there is usually a small baby riding on her back. This baby, Jean Baptiste Charbonneau, was only two months old when his parents took him along on the expedition. Captain Clark called him “Pomp”, “my little dancing boy”. But what happened to the boy who charmed the adults on this epic trip? Author Marion Tinling recounts the life of this intelligent and adventurous man who made history his whole life.

The biography follows the young man through his boarding school years, under the care of William Clark, but not of Clark’s household. After his schooling Jean Baptiste lived in Europe for a time and learned many languages. Upon his return to the United States he became a mountain man and scout alongside Jim Bridger, Kit Carson and others.

Readers familiar with the Lewis and Clark expedition will be interested to learn what happened to Sacagawea’s baby boy. The book is recommended for ages 10 and up, but will certainly hold the interest of history buffs of any age. It’s in our gift shop now!